Create an Account - Increase your productivity, customize your experience, and engage in information you care about.

The City has an active Historical Society with regular meetings and activities.

This page is a synopsis of the main points of the history of Sunset Hills. There are numerous names associated with this history, many of which can be found in the text of the 1971 & 1982 publications of the City’s History. Suffice it to say, the text of this log is a testament to a body of people who were (and are) dedicated to forming and bettering the community where they live and work. There is no way to properly name all, much less describe the people and their efforts that went into the composition of this list of accomplishments. Achievement was merely the expectation that each participant had for themselves, in the process of making this stellar legacy that was, is and continues as... The History of the City of Sunset Hills.

If you have items or information regarding the History of Sunset Hills, please contact the Historical Society at history@sunset-hills.com .

We are a relatively young city, having been incorporated in June of 1957.

In the 60’s, the city acquired an area adjacent to Interstate 44. Comprised of parts of lots within the Meacham Park subdivision, the city was able to put together these lots to form a park close to Lynstone Pl. Thus the name of the city’s first park, Lynstone Park.

In 1971, an Eagle Scout project of the history of Sunset Hills was done by Kent Bessinger. This project was later expanded upon by the Sunset Hills Bi-Centennial Commission in 1976. A later edition of this was published in 1982, as part of the 25th anniversary of the city by the Silver Anniversary Committee. The final product was a 102 page book titled, "The History of Sunset Hills." The text of this is now online and available for viewing.

In April, 1973, the city established it’s own Police Department. They were housed with the city offices (at the time) in Sunset Plaza.

In 1975, a 23 acre tract of land was purchased in the center of the city on West Watson Road. just west of Lindbergh. With construction that took place from 1976 to 1979, Watson Trail Park was created and dedicated on May 20, 1979. The park was named for an old wagon trail that cut through this part of Sunset Hills. This is where the Parks Department offices were located until 2010, as we’ll detail later.

City offices were located in Sunset Plaza from the 60’s through the 70’s. A new City Hall was built in 1980, at 3939 South Lindbergh Boulevard city offices of Administration, Public Works Administration, and Police all moved into this new facility.

In 1981, Riggs Landscaping, (who contracted snow removal and other services to the city since 1968) was purchased and brought into the city to form the city’s Public Works Department. They were located under the former Park Activity Center in Watson Trail Park.

The city expanded by annexations in 1994, 1995, 1996, and 1997. The census of 1990 showed that the city had 4,915 residents before the annexations. This figure grew to 7,885 according to this 1990, data after the annexations.  There were also some strategic land purchases to coalesce a campus of City facilities during this time. 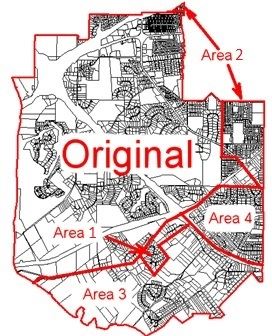 On November 1, 1994, the city accepted the simplified annexation of the subdivisions of Chateau Chura and Rambling Oaks. This annexation added 94 residents and involved 120 acres of land.

In 1995, the Rowe property was purchased by the City. This was land contiguous to Watson Trail Park and City Hall at the intersection of West Watson & South Lindbergh.

On November 9, 1995, an area south of I-44 along our eastern boundary with Crestwood in the Meacham Park tract and an area bounded by Eddie & Park, Sappington, Lindbergh and the city’s eastern boundary north to Eddie & Park, were incorporated into the city through a mutual acceptance vote of the contiguous city and these annexation areas. Again, the city grew by 259 more residents with this 1995 annexation. This area involved 789 acres of land.

On June 6, 1996, the city incorporated the area south of Gravois and west of I-270 to the Meramec River. The southern boundary of this annexation is hard to describe, but basically includes all properties that back up to properties that front Schuessler Road. This area included 980 acres and added 777 residents.

On October 1, 1997, the area bounded by Gravois, I-270, Sappington Road to Sappington Barracks and back to Gravois was annexed into the City of Sunset Hills. This annexation involved 422 acres and added 1310 residents. 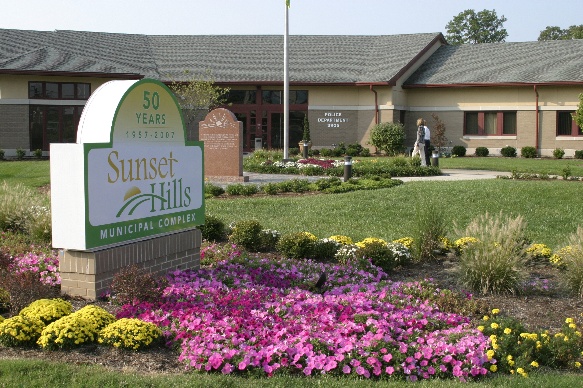 The Police Department (formerly within City Hall) built a new facility on the Rowe tract in 1998. The address of this building is 3905 South Lindbergh and is physically located at the intersection of Lindbergh and West Watson Road.

The Public Works Garage, formerly housed in the basement of the Park Activity Center in Watson Trail Park, also moved into a new facility in 1998 on the Rowe tract. This facility is located at 3909 South Lindbergh, between City Hall and the new police station.

In 1999, 13.3 acres of land south of Southview School on Sappington was acquired under a cooperative agreement with the Missouri Department of Conservation, the Lindbergh School District, and the City of Sunset Hills.  The area was to be kept as a nature preserve with passive trails and known as the Gempp Conservation Area.

In 2000, the City purchased 24.6 acres along the Meramec river just north of the Old Gravois Bridge. The area was a resort from the 30’s known as Mini Ha Ha Beach.  The intent for the City was to turn this area into a park.

In 2003, the Gempp Nature Area was open for operation.

In 2004, a grant was acquired to build roads, shelters, and improve the property along the Meramec by Old Gravois.  With contract administration provided by the Public Works Department, Mini Ha Ha Park construction was completed and opened to the public in 2005.

In 2007, the City celebrated its 50 year Anniversary.  A Time Capsule was placed below a stone carved from the granite of the old bridge of Watson (Old Highway 66) over S. Lindbergh in what was soon to become a courtyard on the City Campus.  The capsule is due to be unearthed and revealed on June 5, 2057, or the centennial of the City’s incorporation.

In 2007, Proposition P (For Parks) was passed by the residents of Sunset Hills to allow for the construction of a new Aquatic Facility to replace the undersized municipal pool in Watson Trail Park and a Community Center for the growing City Campus.  The pieces of a vision for a Sunset Hills Municipal Complex were coming together.

In 2007, the City acquired 16.2 acres on the Meramec River, just north of highway 30.  This was opened the same year as the Sunset Hills Athletic Fields.

In 2008, the City purchased 18.7 acres east of Mini Ha Ha Park.  This area added soccer fields as an amenity to the park.

In 2009, the 22.2 acre Rock Alva lease was taken over by Gateway Rivers Greenway.  Then the City purchased the 22.7 acre Al Moore Tract with an eye toward connecting up river walking trails with other park property in the area. 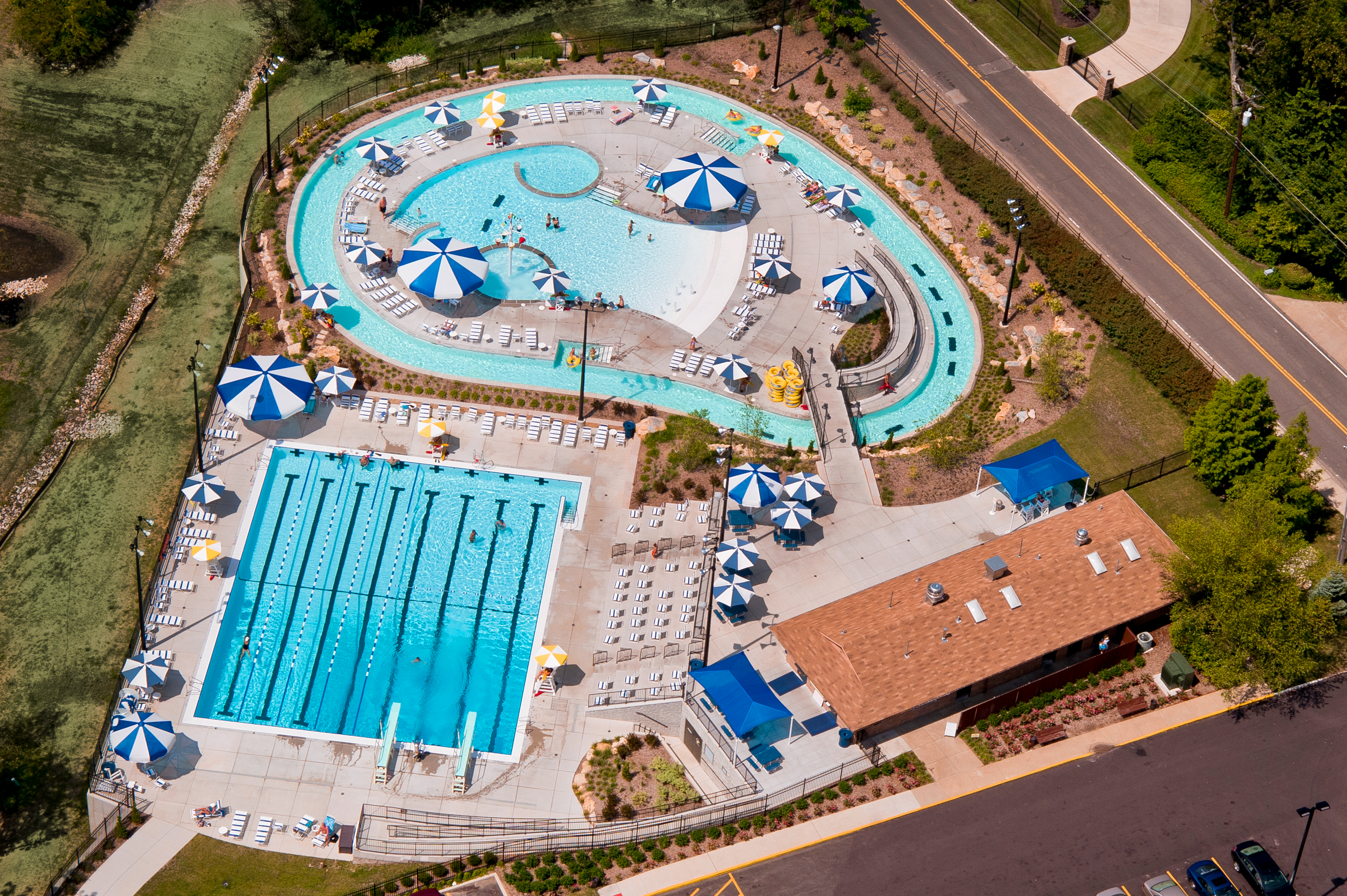 In 2010, construction on the Aquatic Facility including a competition pool with stands & diving area, an inviting wading pool, and a lazy river was completed.

Also completed and opened to the public was a Community Center.  This facility includes size-adjustable banquet/meeting rooms, staff offices, a workout facility, and a gym.

This coalesced and completed a campus like setting for all the departments of the City of Sunset Hills. The addresses and phone numbers for each facility include:

In 2010, in conjunction with grants from Great Rivers Greenway, a trail network was developed involving the Rock Alva & Al Moore Tracts, along with the Athletic Fields and Mini Ha Ha Park.

In 2012, the ball fields on Eddie & Park (having been replaced in the City park system by the athletic complex by highway 30), was converted into Kitun Dog Park, named in honor or former Mayor Al Kitun. 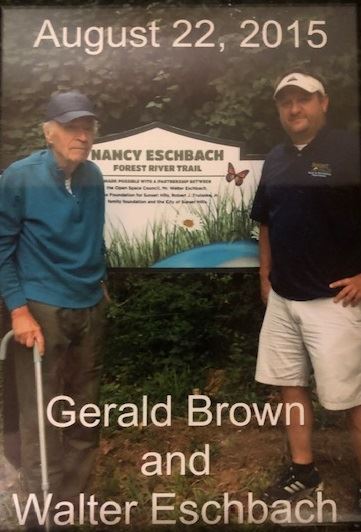 In 2015, the City had 15.6 acres of property donated to become another passive walking park.  The area is along the Meramec river at the end of Mentz Hill Road.  The park is known as the "Eschbach Forest River Trail."

In 2019, the City acquired the former Sunset Lakes Golf Course and Driving Range. This will likely add another 123.9 acres to the City park system.  The Driving Range was opened to the public under City management.

Planning for the use of the remainder of the Bander Property is ongoing.